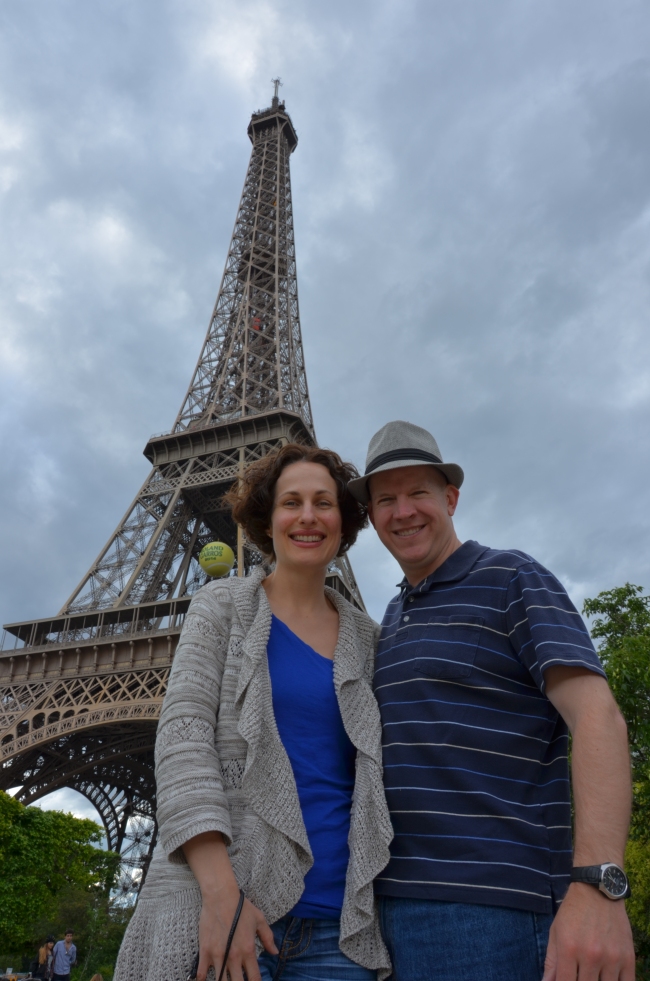 To celebrate our tenth wedding anniversary, Damian and I visited France and Switzerland. There aren’t adequate adjectives in English to describe how incredible this trip was. Maybe in French, but not in English. Alas, je ne parles pas francais (save a few key phrases), so I’m going to muddle through in English and try to do justice to our experiences. (Note: no we did not take the kids. They were in the capable hands of their wonderful grandparents, whom we are eternally grateful for.) I’m going to talk about the trip one day at a time.

We flew from BWI to Charlotte, NC and then over the pond to Charles de Gaulle airport in Paris on Wednesday, May 21st. It was a red eye, so we landed in Paris at around 7 AM on Thursday, 5/22. We found our bags without much ado, which was fortunate because we were pretty delirious from the flight. Passports in hand, we took our bags and prepared to deal with French customs.

This is where I got my first lesson on the French. I’m used to US customs where you are required to complete paperwork, go through several checkpoints and answer multiple questions before they’ll let you into our country. The French, not so much. I was all prepared to smile and assure whomever was helping me that my reasons for entering the country were all on the up and up, but the guy didn’t even look at me, or my passport, as he flipped to a random page and stamped me right on into his country. Next! Any Dick or Jane can just stroll on into France, I guess.

Our next challenge was figuring out the French train system. We had no Euros at this point, and to purchase train tickets you need either a human at a ticket counter or Euro coins to buy the tickets from the automated machines (or a chip & pin credit card, which we don’t have). No problem – we’ll just break out our two key phrases of “Bonjour Madame!” followed by “Parles vous anglais?” and get some train tickets to our hotel. Seems reasonable, right?

Wrong. Here’s where I got lesson two on the French. They go on strike all the time. Guess which day they decided to strike? That’s right! The day we arrived.

So we’re in France, we’re delirious, we don’t speak French, we’ve got no human and no coins with which to purchase train tickets. We can’t walk from Charles de Gaulle to our hotel, which is steps off of the Champs Elysees.

I felt like we were in an episode of The Amazing Race. Luckily we didn’t panic. I think we were too tired to panic, really. We eventually found a ticket counter on the lower level of the train station with a human (and a huge long line of tourists like us trying to buy train tickets). The signs were in French, but we managed to get in the right line, buy tickets, and take the SNCF train (which was bigger than the metro trains, but not as big as the high speed trains) about 30 minutes to the Paris metro.

Let me just say, thank God we know how to ride the DC/New York metros, because obviously all the maps were in French, but once you’ve ridden a metro, you can figure it out anywhere. And we did. We found our destination, found our metro trains, lugged our luggage on board, and zipped off around the Paris underground to the Franklin Roosevelt exit on the Champs Elysees. Which we almost missed, because “Franklin Roosevelt” pronounced with a heavy French accent sounds like “Fronk-Lynne-Rose-Felt” – what? Who’s that?

Fortunately our hotel, the Elysees Mermoz Hotel, which is literally steps off of the Champs Elysees, was not hard to find. Unfortunately check in was not until 2 PM, so our ideas of a snack and nap went to hell in a handbasket. We were able to check our bags with the friendly receptionist, though, and we struck out to wander the streets of Paris in our semi-delirious state.

We meandered up the Champs Elysees all the way to the Arc De Triomphe, which we had seen in movies and many times while watching the Tour de France. It was fairly quiet that morning, perhaps because it was chilly and rainy (or maybe it was just early), so we were able to pause and really take it in without being mobbed by other tourists. Seeing the street paved with cobblestones and looking at the shop windows along the Champs Elysees gave me my first real feeling of “we’re in Paris!” We were so in awe of our surroundings that we just wandered around, soaking in the feel of the place.

Eventually we decided we were hungry, and though we knew the food would be overpriced on the Champs Elysees, we decided to stop at a brasserie/café right on the street and people watch while we ate. We wanted the experience, and it was worth it. I whipped out the other key phrase I know in French, “Un cafe au lait, s’il vous plait,” and was rewarded with a delicious, if itty bitty, cup of coffee. Damian enjoyed his first crepe and a 14-euro coffee/liqueur drink with whipped cream in a fancy glass. And, like we love to do in Las Vegas, we watched the people stroll by.

We saw a lot of high-heeled shoes on the ladies. Bright colors, from teal to yellow, regardless of the color of the rest of the attire. Even the sneakers had high-heeled wedges. Lots of black tights with black shoes as well, which was the one in-fashion way that we seem to line up with the French at the moment. The French businessmen wore suits which were short and tight. An interesting look, if you can pull it off.

Two o’clock finally arrived, and we checked in at our hotel. The Elysees Mermoz Hotel is a boutique hotel, with only 20 rooms, decorated with colorful modern art by local artists. Our room was small but very nice, and the location was unbeatable. We had a king-sized bed and lovely windows that opened up to the street. I enjoyed sticking my head out of that window and just looking up and down the street, watching the people bustling by.

We had tickets to go up the Eiffel Tower at 4 o’clock, which Damian pre-purchased back in the US to save us two hours in the ticket line (he had to get up a 2:30 AM to buy them, because they sell a limited amount, and they go on sale at 8:30 AM in France, selling out within minutes). We zipped past the ticket line and got in line for the elevator ride up. We did wait for a bit on the second tier of the tower, but that was nothing, and the views from the top were everything we hoped for. Beginning the trip with a spectacular panorama of the city we were visiting for the first time was breathtaking and informative. Nothing like a bird’s eye view.

When we hit the street again we found a stand selling wine and bought some to enjoy in the gardens at the base of the Eiffel Tower. Sitting down in a little rose garden area and looking up at the tower while sipping a glass of French red wine was a beautiful moment in the day. We slowed our pace to relax and appreciate the beauty around us.

Afterward we found a local dinner place called Le Royal off a side street that offered a prix fixe menu for only 13 euros that included an appetizer, an entree, dessert and wine! It was delicious and the by far the best value we found anywhere on our trip. I had foie gras, chicken and rice, and a small chocolate/orange mousse, and we shared two carafes of red/white wine.

After that, we crashed for 10 hours into a world of oblivion. The next day we moved on to tour the Louvre……