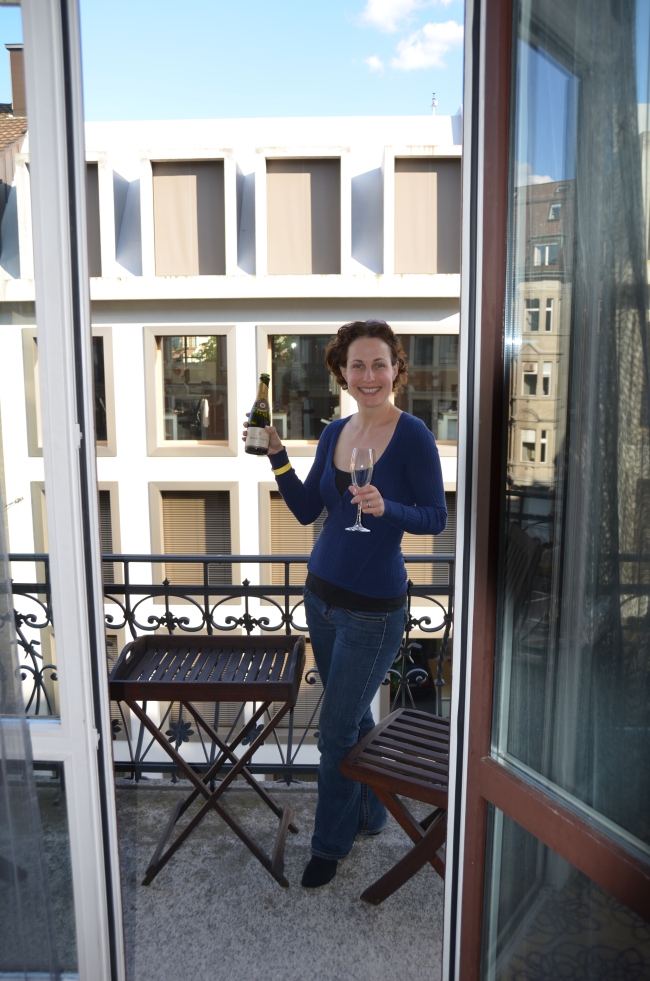 We spent our last night in Zurich, mostly because the hotel was close to the airport. We’d spent the day visiting Jungfraujoch, and we were completely exhausted. So when we discovered that the Alden Luxury Suite Hotel was spectacular, we decided to just stay in and order room service. Ah, room service. We had originally planned to explore Zurich and have dinner out, but we quickly nixed that idea.

The Alden is a boutique hotel with only 20 rooms, much like our Paris hotel. But unlike our Paris hotel, the room was ENORMOUS. It was an apartment, really. It sported a huge bedroom, a living room, a dining area, two bathrooms (who doesn’t need two bathrooms?), and a balcony. The master bath was as big as my kitchen. It was crazy. Why wouldn’t we want to stay and enjoy it?

During the course of our trip, everywhere we stayed Damian noted that we were celebrating our 10th wedding anniversary. Most people just nodded and offered some form of congratulations, but the Alden upgraded us to that palatial room and gave us a chilled bottle of champagne. Sweet! We changed into some giant fluffy robes and ordered room service. The food was nothing to rave about, but it was fast and easy. We paired it with the champagne and some Swiss chocolates. A nice end to a wild day.

The next morning, June 1st, we rose early, checked out, hopped in the car and headed for the airport. Thank goodness it was a Sunday morning and nobody was out, because navigating the streets of Zurich was not easy. Damian had to listen to me instead of the GPS, because she just wasn’t fast enough to keep up with him. Turn here, turn there, turn over there! Oops, we missed it. When we missed a turn and went the wrong way, we came upon a group of six police cars.

Six police cars. In Zurich. And we’re getting pulled over. Panic attack anyone?

We didn’t know what was going on. My first thought was that we had taken a restricted road toward a federal building, and we were either going to be instructed to turn around or taken to the hoosegow. (Hey Mom! We got arrested in Switzerland. Can you come bail us out? It’s only a 9-hour flight. No biggie.) But the officer just greeted us, asked us if we spoke English, inquired about our business on the road that morning, and wished us a safe flight home.

Phew! In hindsight, we think it must have been a sobriety check point. At 7:30 AM. I guess the Swiss like to party.

We made it to the airport, through customs (we were asked several questions by the Swiss customs staff before we could board the plane), and to our seats for the long flight home. They were offering a free glass of wine in a plastic cup with lunch – possibly in an effort to knock everybody out – and a couple of in-flight movies. I took advantage of all of that. We made our connection in Philadelphia and took our 17-minute hop back to BWI.

We got home at 7:30 PM, so the boys were still up, which was wonderful. I missed them terribly, and I couldn’t wait to hug and kiss them. Mason was wildly excited to see us – he pretty much hurled himself into my arms – and both boys talked simultaneously non-stop about all the fun times they’d shared with their grandparents. We enjoyed putting them to bed, and we crashed hard ourselves not long after.

Would we go back? It’s a big world, and there are so many places we still want to explore. But I fell in love with Provence and Interlaken, so if we could squeeze either of those places in on a future trip, then yes. Part of me wants to just chuck it all and get a job as a waitress at the Victoria Jungfrau Hotel.

Many thanks to my wonderful husband for all his hard work planning this trip. The memories will last forever.