Well, we didn’t blow off the top of Mont Ventoux on day 8 of our adventure, so we opted to head to Switzerland on day 9. On Friday, May 30th, we woke for the last time in Avignon at 6:45 AM. This was way too early for the B&B owner, but she left us some croissants and cheese to take in the car with us for breakfast.

If you’re eating a sandwich, you might want to put it down, because I’m going to be offering a seriously nasty description shortly. We drove for 6 hours to Interlaken, Switzerland, and on the way we learned a few things. First, the Swiss make tunnels that are feats of modern engineering. Why go over a mountain when you can just punch a hole right through it? We must have gone through 30 or 40 tunnels of varying length. There were moments when I wondered if the light at the end of the tunnel would ever appear.

Second, we learned that restrooms along the highways are disgusting. Foul. And I’ve been in some foul bathrooms in my life. Nothing as bad as these. There were no toilets, just holes in the ground that you had to squat over. Third-world-country nasty. (shiver) We used them only when absolutely necessary, and I’m not sure I’ll ever get those horrible images out of my head. Okay, the gross part is over.

Third, when we reached the border of France and prepared to drive into Switzerland, we learned that the Swiss cared even less about who we were – and why we were entering their country – than the French. And the French just stamped our passports without even looking at our faces. I bet I could have handed over a passport picturing a 6-foot-tall Asian man and the French still would have stamped me in. The Swiss didn’t even want to see our passports. We could have lost our passports back in a Paris bar, and they wouldn’t have cared a fig. They wanted 40 Swiss francs for a highway pass, and that was it. Give us your money, and come on in!

A lady holding a money belt stopped us on the Swiss border and asked for the highway pass fee. Of course we didn’t have 40 Swiss francs, and because the last toll road had been almost 30 euros (yikes!), we didn’t have 40 euros either. Luckily she directed us to a spot where we could park and pay inside by credit card, or we would have been hosed.

After that minor adventure, we finished the drive to Interlaken and found our hotel, the Victoria Jungfrau Grand Hotel. Interlaken sits between two lakes at the base of the Swiss Alps, and it is without a doubt one of the most beautiful places I have ever been. I’d love to go back. And about this hotel, may I just say, WOW. It’s the nicest hotel we’ve ever stayed in, save perhaps The Bellagio in Las Vegas. The architecture was stunning, the room was exceptional in size and decor, and the windows in our room actually opened up to the cool air and views of the Swiss Alps. I wish we’d had more time to spend in that hotel just enjoying the space and views.

We were pretty hungry after our travels, and I was dying for some coffee, so we checked our bags at the front desk and headed out to the hotel’s terrace restaurant for lunch. The weather was spectacular, and we could see the rose gardens, the park, and the rise of the Alps as we enjoyed soup and coffee. It was a wonderful respite in the middle of our frantic travels.

Because we had little time to spend in Interlaken, we decided to check in, clean up, and head out in search of a cable car ride. More adventure! We took the car and drove about twenty minutes through the Swiss countryside, admiring the lake views, the cottages up on the hillsides, the mountain trains, and the cows. Lotta cows in Switzerland. Anyway, we reached the cable car station, located in Stechelberg. There were three different legs to this trip; we could choose to take a gondola up to Gimmelwald (the first Swiss village on the mountainside), connect to a second gondola and continue up higher to Mürren (a second, higher mountain village), and/or continue up to the summit with a third and final gondola.

Gimmelwald is so isolated that you can only reach it via cable car. You can’t drive up there, giving it an isolated feel. At this point, I wasn’t sure how many cable car/gondola rides I was going to be excited for, so we just bought round-trip tickets between Stechelberg and Gimmelwald. The car was leaving in 3 minutes, so we rushed over and crammed ourselves on with the other travelers. We were surrounded on all sides by clear glass and steel, offering unbeatable views of the Swiss Alps.

And up, up, up we went! Looking up the mountainside, I felt like we were traveling straight up into the air. When we arrived in Gimmelwald, it was stunning. Just a tiny village with houses cut into the mountainside and stacks upon stacks of firewood everywhere we looked. There were no cars and very few people about; stands offering goods for sale were on the honor system (choose your item, leave your money, have a nice day!), and we saw more goats than humans. It almost felt like a ghost town. Almost. The goats and the smoke seeping out of chimneys spoke of life. 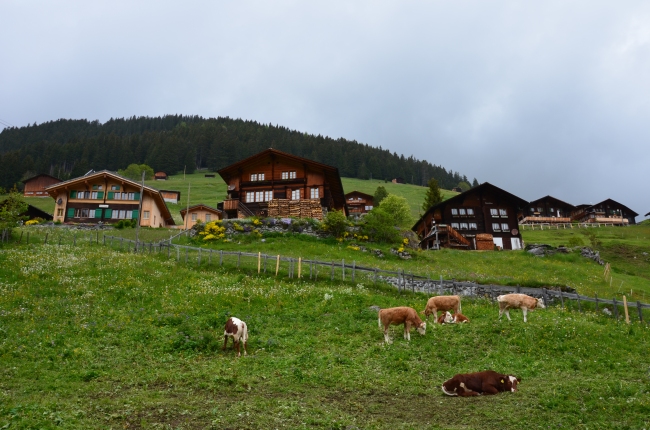 We decided to take the second gondola up to Mürren. Mostly because, if it’s not the summit, it’s not high enough for Damian! But I was charmed by the quiet beauty of Gimmelwald, so I was willing to take another gondola ride and explore Mürren. Only we hit a snafu here – there were only machines at this level requiring cash for ticket purchase. No humans manning the ticket counter. So we made a plea with the gondola operator, and he agreed to take us up to Mürren, provided we bought a round-trip ticket at the manned ticket counter up there. We agreed, and we were off!

There’s nothing quite like the view from a cable car high in the Swiss Alps. We snapped pictures and pressed our noses to the glass to take in as much of the scenery as possible before we stepped off at our next destination. We arrived to find that Mürren was a bit larger than Gimmelwald, and while it also had that feel of isolation from the world, there were hotels up there rather than just tiny B&Bs. We explored the town, saw a few more humans, and while I tried to fight the feeling that I might just roll off the edge of the mountain, we decided it was time for a beer! So we found a restaurant with giant windows looking down over the mountain’s edge and enjoyed a beer. Now that was an experience. 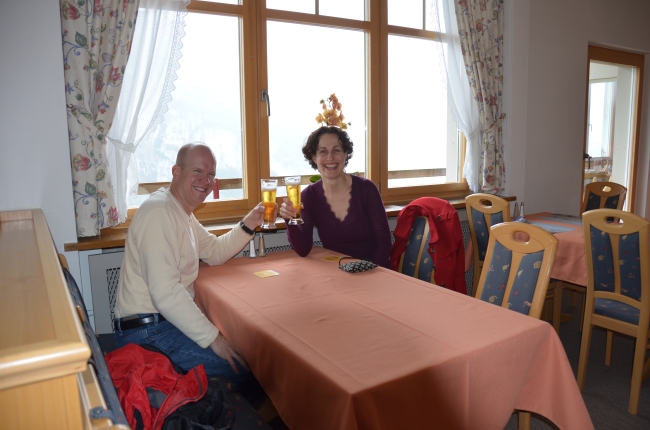 We took the cable cars back down the mountain to Stechelberg and then drove back to the hotel. We struck out to explore Interlaken, and we found a local place for dinner called The Ox Restaurant. It was great! We sat at a huge picnic table with a bunch of other diners. The people to our right were speaking German, to our left Japanese, but I didn’t feel like we were too close together. We split a traditional Swiss dish – sausage with tangy mustard sauce – and an ox burger. Have you had an ox burger? I had never had the pleasure. We both loved it. A bottle of red was a nice compliment to our meal.

We crashed hard and woke the next day for our greatest adventure to date: summiting Jungfraujoch, the top of Europe….