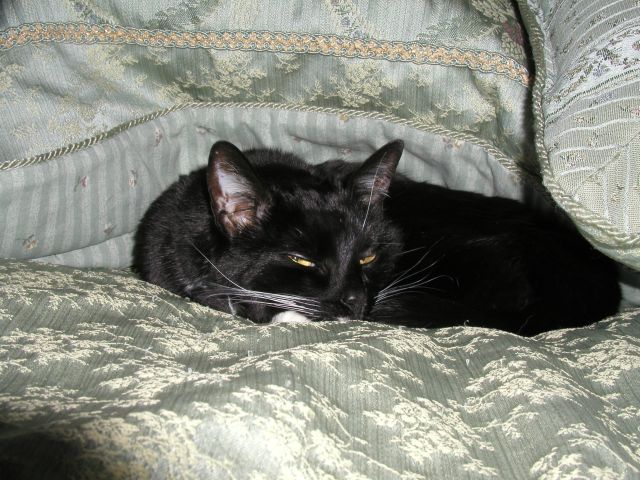 Tomorrow I will be making pancakes for breakfast. It’s Thursday. The boys get pancakes on Thursdays. The night before, I always set out the pancake mix, the bowl, the pan, and the cup of water I’ll need in the morning. As I was setting out the water tonight, my first thought was, “I better cover this glass so Calypso doesn’t jump up on the counter in the middle of the night and drink out of it.” And then I remembered that she can’t. She can’t because she’s gone now. She’ll never drink from one of our water glasses again, because this afternoon we took her to the vet and had her euthanized.

It happened so fast. Too fast. Just last week she was fierce. Full of personality. Purring, jumping on our laps, asking for tuna, running around the house, giving us all the love and attitude that she always has. But this week, everything changed.

I remember the moment that I met her. She was just one of a litter who needed a home. But the moment I walked into the house she lived in, I knew she was the one. She marched up to me with her itty bitty little self, looked up, said, “Mew,” with her tiny kitten voice, and that was it. I was in love with her. I picked her up, found that she was so small that she could lie in my hand as I petted her with two fingers. She came home with me that night, and she became my constant companion for almost the next 19 years.

And that is exactly what she’s been. My constant. So many people have walked into and out of my life. I’ve lived in so many different places. Had different cars. Changed jobs. Been married. Had children. Lived through surgeries, tragedies, holidays, ups downs lefts rights this that and the other thing – and through all of it, through every single step, there has been one constant. One tiny little being who has always been with me. And that was Calypso. She was my constant through half of my life on this earth.

That constant is gone now, and a part of my heart is gone too. I had no idea how much this would hurt. I haven’t felt anything like this since the days when we thought we might lose Corey.

I was with her when she died. Damian, Corey, and Mason were all in the room when the vet weighed her, found that she’d wasted to a mere 4 pounds, examined her, and said, “If this were my pet, I would let her go.” Damian and the boys said goodbye to her, and then they left me to see her through to the end. The vet gave her a powerful anesthetic, and in true Calypso fashion, she found one last spike of sass, whipped around and schwacked/hissed at the vet. The vet said, “Whoa! I didn’t expect her to be that fast.” I actually smiled, despite the situation, at that one last “back off!” that my sassy cat whipped out at the very end. Then Calypso turned to me, pressed her little face into my chest, and I stroked her fur, whispered that I loved her, and waited for the medication to take effect.

The final dose of heart-stopping medication was administered as she calmly rested on her side, the vet listened for her heartbeat, said, “Her heart has stopped, she’s gone, I’ll leave you alone for a few minutes.” She left, and I said my final goodbye. Calypso’s passing was peaceful, but it struck me, as I looked at her lying there on the table, that she was so thin, her fur was so knotty, she just looked so wasted and old, that we absolutely made the right decision. Her life was over. She’d refused food and drink for two days. She was done. It was a kindness to let her go.

But it hurts so much. I feel her absence. It’s amazing how quiet it is in our house now. How could a 5.5 pound being bring so much life to a house? So much energy? So much presence? But she did. She was a tiny little being who meant so much to me, to all four of us, and I will miss her every day.

Goodbye, my little Buddha. I love you so much. Be at peace.