Yeah, we did that. Forget gambling in Las Vegas. We went for the full-on adrenaline junkie outdoor adventure with Las Vegas Rock Crawlers on the Logandale Trails. And those trails were no joke. Owners Tim and Quinann let us know that the difficulty level of these trails on a 1-10 scale is a 7. If Logandale is a 7, then I don’t want to see a 10. Ever.
Here’s what I’ve learned. When my husband says, “Yeah Honey, we’re going to have a little adventure together,” I say, “You have fun with that. I’ll be at the spa.” It’s not like I don’t know Damian. The man jumps out of planes and bungee jumps off bridges. What was I thinking? Apparently I wasn’t, because we pretty much lost our minds and decided to jump in that red Jeep Wrangler. Las Vegas Rock Crawlers is an apt name – those Jeeps literally crawl through the most amazing and terrifying rock obstacles. We crawled that Jeep through some beautiful red rocks – it was totally insane. And while it was terrifying, and I am apparently a rock-crawling weenie, we did love it, and I can’t say enough good things about Las Vegas Rock Crawlers.
But let me back up and begin at the beginning. We started the tour by meeting several other groups of people (who were also driving that day) on the rooftop deck of The Wynn Hotel at 7:30 AM. There were 2 other couples and a family of 4. The family drove a 4-door Jeep, the rest of us had 2-door Jeeps. We signed some forms and then headed up to Moapa (which is a Native American reservation) to begin our adventure.
We drove 60 miles in a caravan up to Moapa, and it was FREEZING COLD. We were the last to sign up, so we got the oldest Jeep of the bunch. It’s from 1998, open in the back, and temps were running in the thirties that morning. I had myself wrapped up in a blanket with the heat blasting, and my toes still felt like ice cubes by the time we got there. Not to mention how loud that thing was. Damian and I literally had to yell to hear each other when we were blasting down the highway toward our destination. I must say, being in that caravan was pretty bad ass – people all along the road craned their necks to look at us. It’s not something you see every day – a caravan of red Jeep Wranglers with massive tires barreling down the highway together.
Before we reached the trail, we stopped at a gas station to let the air out of the tires and flip the Jeeps into 4-wheel drive. From there, it was about 2 miles out to the trails. Once we reached the trail head, there were no other people around. It was amazingly isolated and quiet, and it struck me then that, if any of us got stuck, it was going to be up to us to get unstuck. Or rather up to the rest of the caravan, because I’d probably be busy quaking in fear and/or crying in a bush somewhere.
Tim instructed all of us to get out of our Jeeps and then showed us the first obstacle. When he said, “So your left front tire is going to drive over this rock right here” – and that rock was straight up and down, I thought he was joking! He was not joking. Tim doesn’t joke about rock crawling. He explained, in terrifying detail, the way to navigate the first obstacle, then I watched with my jaw hanging open as he then demonstrated with his Jeep. Guess who got to go next? Us! And we had the oldest Jeep! Which meant the one that would be hardest to navigate through the obstacles.
Great. We’re gonna die.
I got in the Jeep, belted myself in, and white-knuckled my way through that obstacle. Tim stood outside on the rocks and talked Damian through it over my screams of protest. No I am not kidding. I was literally screaming. The Jeep was tilted so far to the right that we were pretty much sideways and my face was about 5 inches from a rock. I thought Damian was going to flip us for sure. I can’t believe we didn’t flip. But Tim was totally calm, and that kept Damian totally calm. I was not calm. My heart was hammering in my chest and I was so scared that I scared the crap out of the rest of the wives. Well, 2 out of the 3 – the family of 4 were totally fearless.
I got out of the Jeep after that obstacle and did not ride through the next one. I hiked it on my feet. Feet that I trust, unlike my rookie husband driving that ancient Jeep. Damian who said, “Yeah, we might flip,” like he was saying, “Yeah, we might get a steak later.” Nonchalant. Gah! Roll bar or not, I did not want to end up upside down or rolling down the side of a cliff. Thanks, but no thanks. One benefit to my screaming-banshee escape from Jeep was that I was able to get some great photos. Like this one of Damian manning his way through the second insane obstacle. That’s Tim on the rock talking him through/taking his picture.

Take a look at his left front wheel. Not. On. The. Ground.
After that, I rode with the company owner. Really. I knew that Tim wasn’t going to flip his Jeep, and even though going through the obstacles was still going to terrify me, I wasn’t going to die. Though there was a chance that Damian was going to bite it, but I figured that was his choice. Here he is, grinding his wheels and slipping while not biting it. Like a boss.

So I asked if Tim’s wife, Quinann, would switch with me, and she kindly agreed. She was awesome – so laid back and friendly. Just the perfect personality, along with her husband, for guiding a bunch of rookies through a really difficult course and keeping idiots like me from losing our heads. She was also helpful for Damian, because she could help guide him through the obstacles from the passenger seat. The more difficult obstacles Tim guided each Jeep through one at a time, but Damian still benefited from her experience for the easier crawls. She’d say, “Hug that bush!” – and Damian would hug the bush with his wheel, which is not something he otherwise would have thought of. Damian got his man card punched. I got my weenie card punched. I’m okay with that. I didn’t stop the production or ruin anybody else’s trip, so who cares? And now I can say that I did it. Here’s some proof that I did it, in case you’re really not sure at this point. 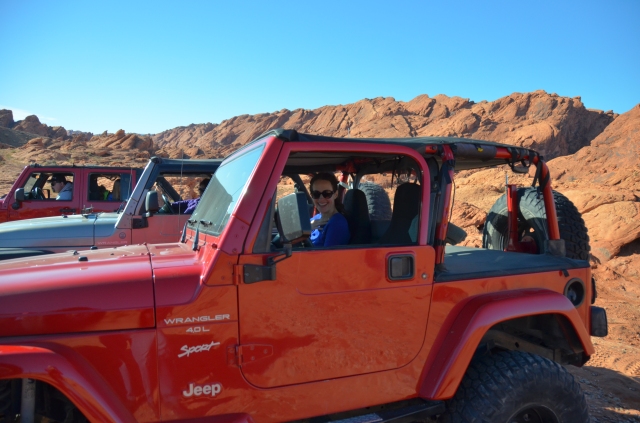 We crawled through those rocks for hours, and then we hit some dunes. That’s what I’d initially thought we’d be doing. Blasting around the dunes – weee! Nope. We did that for about an hour, and it was fun, but it was almost like an afterthought following the harrowing red rock journey. Here’s a shot of us in the dunes. The landscape was breathtaking, however, and not to be missed. 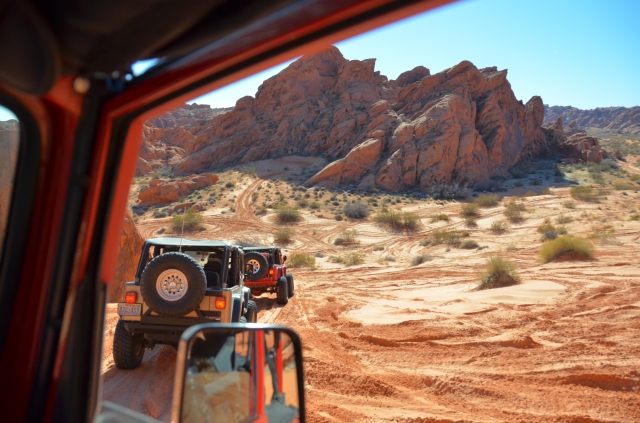 One other highlight was gunning the Jeep up a steep dirt hill. Tim did this maneuver without giving me any warning, and we were about halfway up the hill before I even knew what was going on. Which was good – less time to freak out. At the top we parked, got out, and enjoyed one of the most magnificent views I’ve ever seen. Just gorgeous sun and red rocks all around us. That part was really peaceful and nice. I think my heart rate returned to normal for that portion of the trip. This is the hill – and that’s Damian gunning it with Quinann in the passenger seat.

When Damian and Quinann crested that hill, she gave me a look of faux fright and said, “Get me outta here! He’s a maniac!” Cracked me up.
Another benefit to riding with the owner was listening to his tales of previous tour guests as well as other off-roading experiences he’s had. He talked about a place called Cliffhanger in Utah that even had him rattled, and this guy doesn’t rattle easily. He also shared stories of other people who were frightened by the experience – some who made it happen, some who saw the first obstacle and flat out refused. I’m glad I didn’t quit – it was an unforgettable experience, and one that I don’t regret. Maybe one day I’ll have the guts to go back and do it again and actually stay in the Jeep. Or drive the Jeep. On the highway.
We stopped at a park area and ate lunch together – sandwiches, chips, and water, which was nice – I was so busy fearing my imminent death complete with several broken bones that I didn’t consider the fact that I was actually really hungry.
After that, it was back to the strip. We dropped the Jeep off at the Wynn and headed off for adventures that are more my speed. At the Beer Park.
If adrenaline is your thing, and you like off-roading, do this. I’d love to hear about your adventures from the comfort and safety of my couch.