Since I’ve recently written a book on raising a child with CHD, I’m reading a book on publishing.  The book suggests creating top 10 lists and blasting them all over the net as a means of promoting my book.  Everybody loves top 10 lists.  I’m still playing around with backgrounds and pictures, but in the meantime, I can type. 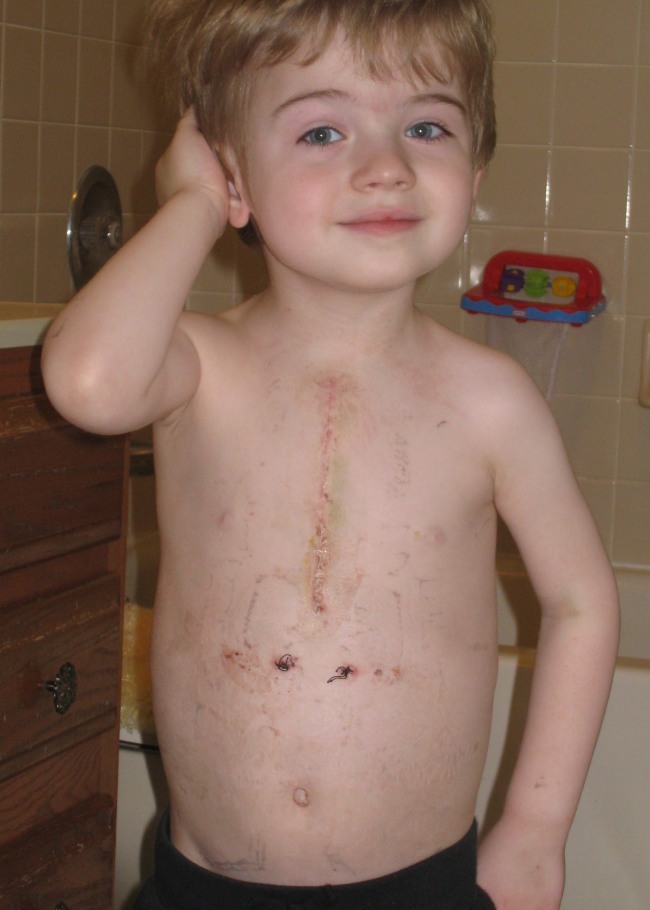 Only what kind of top 10 list am I going to be able to write about raising a child with a major congenital heart defect that might end up being even remotely funny?  CHD is not funny.  So I started brainstorming and came up with a few ideas.
Idea 1. Top 10 Facts About CHD
Meh.  Not funny.  Informative maybe, but I’m not a doctor, and while I might offer some CHD facts in the book, they’re not meant to replace real medical advice.  So I scrapped that one.
Idea 2. Top 10 Pictures of Kids with CHD
Better.  But does anybody want to look at a bunch of other people’s kids with tubes and wires sticking out of them?  And still not funny.  I scrapped that one too.
Idea 3. Top 10 Responses to “Hey, where did your kid get that big scar on his chest?”
Now this one might have some legs!  Or teeth.  Or, er, something.  Let’s try it.
Top 10 Responses to “Where did your kid get that big scar on his chest?”
Number 10. “Walmart.  Aisle five.”
Number 9. “He just woke up one day, and there is was!”
Number 8, “His cousin gave it to him for his eighth birthday.”
Number 7, “Santa.  He misread the letter asking for a big CAR.”
Number 6, “The Tooth Fairy left it when she picked up his last tooth.”
Number 5, “Majorca.”
Number 4, “Bar fight.”
Number 3, “Freak duck pin bowling accident.”
Number 2, “He drank too much cider and fell off his little red wagon.”
Number 1, “A talented surgeon gave it to him while saving his life.”
So I’m still working on the photos in general, but this is a good one showing Corey’s healing scar after his surgery.